No Pinot Noir for the Postman

Today I made a lunchtime journey to the post office. I had a package to mail. 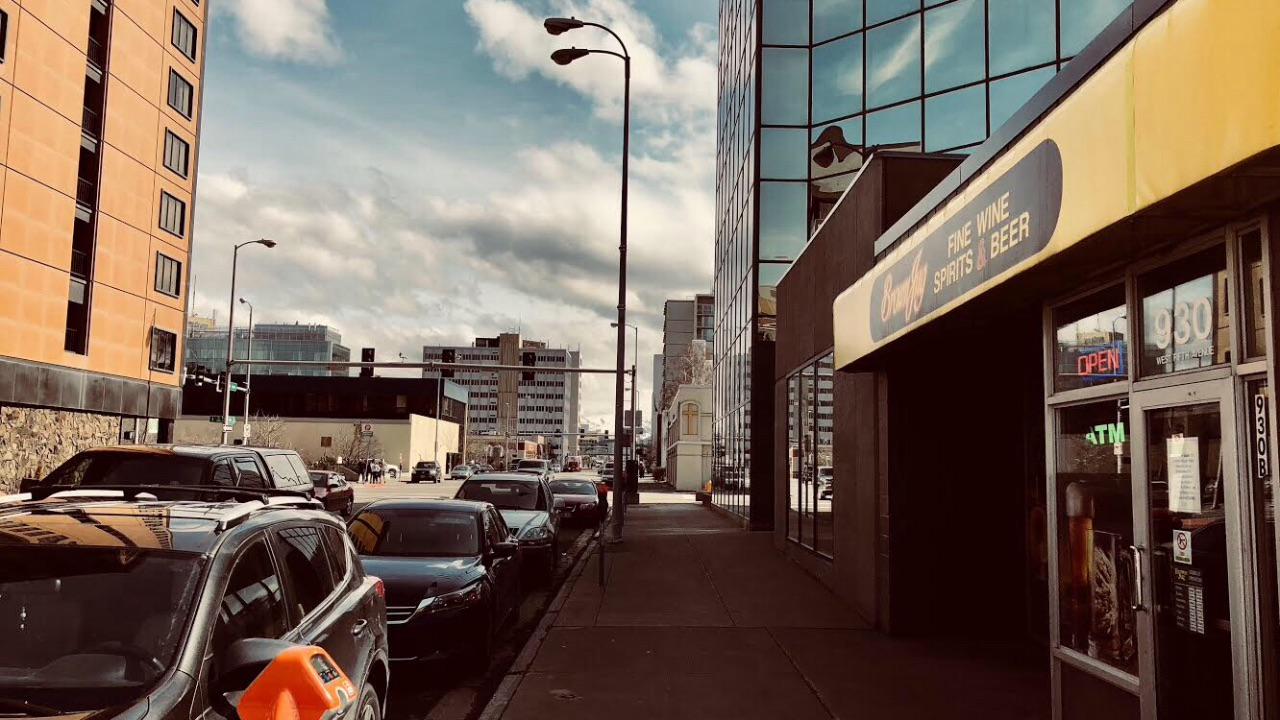 I left the office. The afternoon clouds were leaning against the mountains. When I turned east on Fifth Avenue, I walked past the Brown Jug liquor store. Three cashier girls were standing outside smoking cigarettes. They smiled and said hello.

Hello, I said. Then I walked on toward the mall.

A guy rode by on his bike with a chain (a thick chain like you’d buy at the hardware store) wrapped around the stem of his bike seat. It was cinched with a big sliver padlock.

Two dudes in flat-brimmed ball caps were telling a young woman in jeans and black Converse how she could be tracked by her phone. They seemed very excited about the possibilities.

I walked through the north doors of the mall and into the smell of burnt sugar. Up three flights of stairs to where a small post office branch hides in the corner between a shoe store and JC Penny. No one was waiting in line. The postman sat behind the cash register organizing rolls of stamps. He had a short gray beard and round brown glasses.

I asked him if he had a pen I could borrow.

He smiled. Without speaking he handed me a blue pen with a small piece of white tape on the end like a flag.

I wrote the addresses on the Priority Mail label and stuck it to the side of the package I needed to mail. I handed it to the postman. He set it on the scale and tapped buttons I could not see.

I thought it might be busy at lunchtime, I said.

It’s hardly ever busy here, he said. Hardly anyone knows there’s a post office in the mall. But it’s been here for 22 years now. And I’ve worked here since Day One.

I told him I thought that was spectacular and he smiled a quiet smile. Then I set his pen on the counter. I paid my postage. And I waved goodbye.

I walked downstairs and back out the north doors. A young guy wrapped in a dirty pink bedspread asked if I could spare him some change so he could buy a doughnut. He called me sir, which made me laugh. I gave him the 35 cents I had in my pocket.

Near the curb, a woman in big sunglasses was peeling bills off a thick roll of cash to pay the driver of a yellow taxi cab. She wore a green parka with fake fur trim on the hood. The fake fur was white.

I walked back toward the office. It was just starting to rain as I stepped into the Brown Jug. I showed my driver’s license to one of the cashier girls there, and she let me in the door. She had a lotus flower design shaved into the short hair on one side of her head. I bought their last two bottles of Sonoma River pinot noir because they were on sale. Buy one get one for a dollar.

I wondered what kind of wine a man who’s worked at the post office in the mall for 22 years would drink. I thought about walking back to the mall to offer him one of the bottles I’d just bought. But my lunch break was over and it occurred to me that it might turn out awkward if he wasn’t a pinot noir kind of guy. So, no Pinot noir for the postman.

Instead I walked back to my office with both bottles of wine in a white plastic bag. The bottles sat there in the bag on my desk while I stared out the window for the rest of the afternoon, watching the clouds taking it easy with their elbows on the mountains.